In July 2014, Owen Paterson was sacked from his position as DEFRA environment secretary during the cabinet reshuffle. He blamed the move from David Cameron as simply a desire to appease the "powerful, self-serving" environmental lobby – dismissed by Paterson as "the green blob". Then, just months after leaving DEFRA Paterson delivered the annual keynote speech at Lord Lawson's climate science denying Global Warming Policy Foundation. In it, he called for the UK to abandon its legally binding climate targets and pursuit of renewable energy. During office, Paterson slashed funding for climate change and according to insiders, “wouldn’t even read a briefing from his team if it contained the words ‘climate change’”. In 2013, told a fringe meeting at the Conservative party conference: "People get very emotional about this subject [climate change] and I think we should just accept that the climate has been changing for centuries." 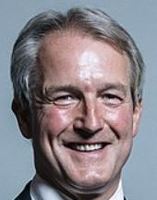