Secretary of State for Environment, Food and Rural Affairs since 2017, and; Member of Parliament (MP) for Surrey Heath since 2005.

Michael Gove and climate change: In 2013 while education secretary, Gove tried to exclude climate change from geography national curriculum but abandoned his plans after intense pressure from then energy secretary Ed Davey. Then, in December 2014 Gove, as Tory chief whip, barred the new energy and climate secretary Amber Rudd from attended the UN climate negotiations in Lima, Peru. Career history: Michael was Shadow Minister for Housing from 2005 to 2007 and Shadow Secretary of State for Children, Schools and Families from 2007 to 2010. He was appointed Secretary of State for Education in May 2010. From July 2014 to May 2015, he served as Government Chief Whip and Parliamentary Secretary to the Treasury. He was was appointed Lord Chancellor and Secretary of State for Justice on 10 May 2015. 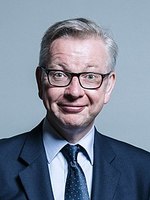