The daughter of late New York philanthropist Preston Robert Tisch -- cofounder and chairman of the board of the Loews Corporation and co-CEO of the New York Giants football team -- and his widow, Joan, Tisch inherited their propensity to donate both money and time. A University of Michigan graduate, she taught Spanish for five years at a public elementary school in Park City, Utah, then moved to the Big Apple. Shortly after the first of her two daughters was born, Tisch began volunteering at the Manhattan Laboratory Museum. She spearheaded its re-creation as the much-praised Children's Museum, meanwhile, she says, coming to "understand the power of all the arts in children's and families' lives." Impressed, the Annenberg Foundation tapped Tisch to lead the independent public schools arts initiative, partnering with the city's department of education, its cultural office, the teachers' union, and others. 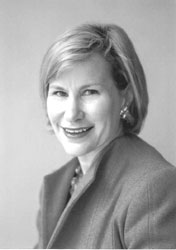