Phil Adams of Bryan/College Station received his Bachelor of Science degree from Texas A&M University in 1971 and began his career in the insurance business. Mr. Adams is the owner and president of Phil Adams Company, which provides insurance products and services to businesses and individuals throughout Texas. He has attained membership in the Million Dollar Round Table, Top of the Table and the Association for Advanced Life Underwriting. Mr. Adams serves on the board of directors of American Momentum Bank, with banking operations in Texas and Florida. He previously served on the board of directors of First American Bank, which was sold to Citigroup in 2005, and on the boards of many civic organizations, including the Bryan/College Station Chamber of Commerce, the Chancellor’s Century Council, the Texas A&M/BCS Council, Brazos County United Way and the Central Texas Association of Life Underwriters. Mr. Adams has served as president of the Brazos Valley Estate Council and chairman of the Brazos County Republican Party. Mr. Adams is a member of the National Association of Insurance and Financial Advisors and of the Philosophical Society of Texas. He also currently serves on the board of the Texas Public Policy Foundation and the Texas A&M Mays Business School Development Council. Mr. Adams is serving his second six-year term as a member of the Board of Regents. He was first appointed by Governor Rick Perry in 2001 and again in 2009, and was elected to serve a two-year term as Chairman of the Board on May 1, 2013. He served as Vice Chairman of the Board from 2011-2013. He has served as chair of the Committee on Audit and as a member of the Committee on Buildings and Physical Plant. He has also served as the Board’s special liaison to the Association of Former Students. His term expires February 1, 2015. 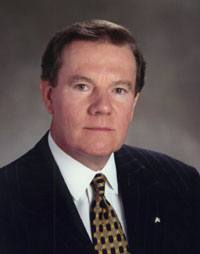