Mr. Godfrey Gill, a member since 2015, is senior vice president, investor relations, for Vista Equity Partners. Previously, he was managing director at Lyrical Partners, L.P. A native of Washington, DC, he has lived in New York City for over 20 years. Most of his professional career has been spent on Wall Street in various roles. Upon graduating from Howard, he worked as a financial analyst in the investment banking division at First Boston and then as a vice president in the equities division of Goldman, Sachs & Co. In 1999, he began his foray into the hedge fund sector and was recruited by Kingdon Capital Management, a multi-billion dollar asset management firm, as a portfolio manager and equity analyst. In 2003, he left New York and Wall Street and moved to South Africa, where he provided consulting services to small businesses for a year. In addition, he ministered to a large congregation at a township church near Plettenberg Bay on the southern tip of the country. Upon returning to NYC, he founded his own hedge fund, Keel Capital, which invested in companies at the forefront of creating disruptive change. In 2007, he left Keel to join a global multi-billion dollar hedge fund, Karsch Capital, as a managing director. During his time at Karsch Capital he took on many roles in business development, operational, managerial, investment and strategic planning. Mr. Gill is an alumnus of Howard University’s School of Business with a Bachelor of Business Administration degree in finance (1989); he holds an MBA degree in business administration and management (1994) from Harvard Business School. Mr. Gill is married, lives in Manhattan and has several interests outside of work including: mentoring young men; serving on the development committee at his alma mater, DeMatha Catholic High School; and contributing as the treasurer of Coney Island Prep, a K-12 charter school in Coney Island, Brooklyn. 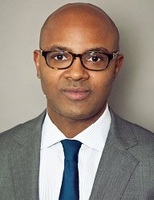