Democratic US Senator from Indiana

(son of Birch Evan Bayh), a Senator from Indiana; born in Shirkieville, Indiana, on December 26, 1955; graduated Indiana University 1978; J.D. University of Virginia 1981; practiced law in Indianapolis; became Indiana secretary of state 1986; governor of Indiana 1989-1997; attorney and partner with Baker & Daniels 1997-1998; elected as a Democrat to the United States Senate in 1998; reelected in 2004 and served from January 3, 1999, to January 3, 2011; was not a candidate for reelection to the Senate in 2010. Senator Bayh is presently a partner with McGuireWoods LLP and a senior advisor with Apollo Global Management. He also serves on the boards of directors of Fifth Third Bancorp, RLJ Lodging Trust and Berry Plastics Group, Inc. 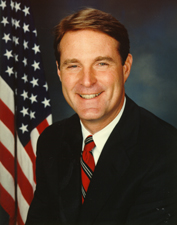