Information technology executive. Co-founder of Lumi Labs and former CEO of Yahoo! and VP at Google.

American information technology executive, and co-founder of Lumi Labs (2017). Mayer formerly served as the president and CEO of Yahoo!, (July 2012-June 2017) after a successful career at Google (1999-2012) where she held various positions including VP of Search Products and User Experience. Prior to her tenure at Google, she worked at UBS research lab in Zurich, Switzerland and at SRI International in Menlo Park, California. Marissa Mayer is a graduate of Stanford University, where she later taught computer programming. Mayer serves on the board of directors of Wal-Mart Inc. She is also on the board of various non-profits, 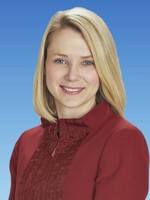