Former chair of the DNC and governor of Virginia

Terence Richard "Terry" McAuliffe (/məˈkɔːlᵻf/; born February 9, 1957) is an American businessman and the 72nd Governor of Virginia. He served as Chairman of the Democratic National Committee, from 2001 to 2005, was co-chairman of President Bill Clinton's 1996 re-election campaign, and was chairman of Hillary Clinton's 2008 presidential campaign. He was an unsuccessful candidate for the Democratic nomination in the 2009 gubernatorial election. In the 2013 gubernatorial election, he was unopposed in the Democratic primary. McAuliffe defeated Republican Ken Cuccinelli and Libertarian Robert Sarvis, in the general election, collecting 47.8% of the vote; Cuccinelli garnered 45.2% and Sarvis received 6.5%. He became governor on January 11, 2014. On May 23, 2016, the FBI disclosed that it was investigating whether McAuliffe’s 2013 campaign accepted illegal contributions. 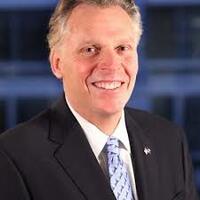