Kendrick Meek served in the Florida House of Representatives and the State Senate and was elected in 2002 to the congressional seat being vacated by his mother. He served four terms before giving up his seat in an unsuccessful run for the Senate. son of Carrie Meek), a Representative from Florida; born in Miami, Dade County, Fla., September 6, 1966; B.S., Florida A&M University, Tallahassee, Fla., 1989; member of the Florida state house of representatives, 1994-1998; member of the Florida state senate, 1998-2002; elected as a Democrat to the One Hundred Eighth Congress and to the three succeeding Congresses (January 3, 2003-January 3, 2011); not a candidate for reelection to the One Hundred Twelfth Congress, but was an unsuccessful candidate for the United States Senate in 2010. 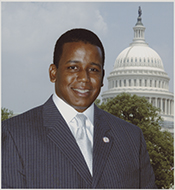