Chairman and CEO of the Prince Group and Academi (formerly Xe, Blackwater)

Chairman and CEO of the Prince Group and Blackwater Worldwide, once named Blackwater USA, later renamed XE, then Academi. Born into a wealthy family, the youngest child of Edgar D. Prince, founder of the Prince Corporation (an automobile-parts company that introduced lighted vanity mirrors for cars). Prince's father co-founded the Family Research Council with Gary Bauer.Prince is the brother of Betsy DeVos, a former chairwoman of the Michigan Republican Party and wife of former Alticor (Amway) president and Gubernatorial candidate Dick DeVos, son of Richard DeVos, Sr. (listed by Forbes in 2007 as one of the world's richest men, with a net worth of $2.4 billion).[12] Prince's first wife, Joan Nicole Prince, died of cancer in 2003, and he has since remarried. He has six children. 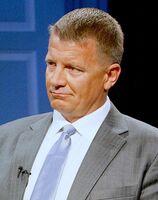