US Senator from Maine (2013-present); former Governor of Maine

Angus S. King Jr. was born in Alexandria, Virginia. He earned a bachelor's degree from Dartmouth College in 1966 and a law degree from the University of Virginia Law School in 1969. As an aide to Senator William D. Hathaway of Maine from 1972 to 1975, he served as chief counsel to the U.S. Senate Subcommittee on Alcoholism and Narcotics. A practicing attorney from 1975 to 1983, he founded an energy conservation company in 1989 and served as its president until its sale in 1994. For nearly 15 years, Governor King was the host of a Maine public television public affairs program. 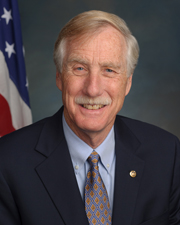