Labor racketeer from the Brooklyn waterfront

Anthony M. Scotto, a former leader of the longshoremen’s union whose polished manners and soft-spoken approach made him seem out of place in the turbulent, often corrupt world of the waterfront until he himself went to prison for labor racketeering, has died. He was 87. His death was announced on Sunday on Instagram by his daughter, Rosanna Scotto, a co-host of the Fox Five New York news program “Good Day New York.” She gave no other details. Mr. Scotto had homes in New York City and Southampton, N.Y. Scotto became president of the Brooklyn-based Local 1814 of the International Longshoremen’s Association in 1963, succeeding his father-in-law, Anthony Anastasio, who had died of a heart attack at 57. The Justice Department in 1969 told a Senate investigating committee that informants had identified him as a captain in the mob family headed by Carlo Gambino. In 1970, he invoked his Fifth Amendment right by refusing to answer questions before a committee of the New York State Legislature on whether he was a member of the Mafia. Although his father-in-law, Mr. Anastasio, was never convicted of a serious crime, no one disputed that he had earned his nickname, Tough Tony. And Mr. Anastasio’s older brother was the much feared Albert Anastasia, a mob boss and hit man who was said to have run the Mafia’s Murder Inc. gang and who had also worked on the docks. (Albert spelled his surname with an “a” at the end.) He graduated from St. Francis Preparatory High School there and began working on the docks while attending Brooklyn College. He had his eye on law school until dropping out of Brooklyn after his second year. He also began dating Anthony Anastasio’s daughter, Marion, whom he married in 1957. In 1979, federal prosecutors in Manhattan obtained a 70-count indictment charging Mr. Scotto and others with labor racketeering and tax evasion. Mr. Scotto was convicted after a two-month trial. (An Anastasio nephew, also named Anthony Anastasio, the executive vice president of Local 1814, was also convicted of taking payoffs and sentenced to two years in prison. He was released in October 1984, his five-year sentence having been cut by two years for good behavior. His sons, Anthony Jr. and John, drove him home. In addition to his daughter, they and his wife survive him, as do another daughter, Elaina, and eight grandchildren. In recent years the Scotto family has operated a restaurant, Fresco by Scotto, in Midtown Manhattan. 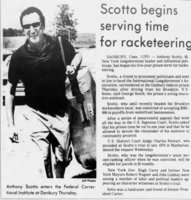