Sen. Elizabeth Warren (D-MA) is the Leo Gottlieb Professor of Law at Harvard University. She has written eight books and more than a hundred scholarly articles dealing with credit and economic stress. Her latest two books, The Two-Income Trap and All Your Worth, were both on national best seller lists. She has been principal investigator on empirical studies funded by the National Science Foundation and more than a dozen private foundations. Warren was the Chief Adviser to the National Bankruptcy Review Commission, and she was appointed as the first academic member of the Federal Judicial Education Committee. She currently serves as a member of the Commission on Economic Inclusion established by the FDIC. She also serves on the steering committees of the Tobin Project and the National Bankruptcy Conference. The National Law Journal has repeatedly named Professor Warren as one of the Fifty Most Influential Women Attorneys in America, and SmartMoney Magazine recently designated her one of the SmartMoney 30 for 2008. She was also one of eight law professors to be named on the Leading Lawyers in America list compiled by Law Dragon. A Senator from Massachusetts; born in Oklahoma City, Okla., June 22, 1949; attended George Washington University, 1966-1968; graduated University of Houston, B.S., 1970; graduated Rutgers University, J.D., 1976; elementary school teacher; lawyer; law professor; bankruptcy analyst; chair, Congressional Oversight Panel for the Troubled Asset Relief Program 2008-2010; special assistant to President Barack Obama for the Consumer Financial Protection Bureau 2010-2011; elected as a Democrat to the United States Senate in 2012 for the term ending January 3, 2019. 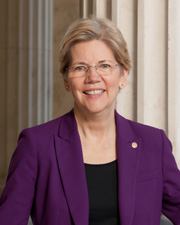