Biden Nominee for Representative to the United Nations for Management and Reform, with the Rank of Ambassador, Department of State; former Obama White House Cabinet Secretary (Appointed 11-19-08)

Chris Lu is currently a Senior Strategy Advisor at FiscalNote, a D.C.-based technology company, and the Teresa A. Sullivan Practitioner Senior Fellow at the University of Virginia Miller Center. Previously, in a career of public service that spanned two decades, he served in all three branches of the federal government. From 2014 to 2017, Lu was the Deputy Secretary of the U.S. Department of Labor, having been confirmed unanimously by the U.S. Senate. In this role, he served as the chief operating officer of a department with 17,000 employees and a $12 billion budget. The son of immigrants, Lu was only the second Asian American in history to become deputy secretary of a Cabinet department. Lu was born in New Jersey and raised in Maryland. His parents came to the United States from Taiwan as graduate students in the 1960s. Lu grew up listening to the news and reading biographies of famous statesmen with his father, an electrical engineer who loved history. Lu became interested in politics, and has said he was grateful that his parents encouraged him to study whatever interested him. His grandfather, Wang Ren-Yuan, was Taiwan’s Attorney General from 1960 to 1966 and was a representative in the Legislative Yuan. Lu is a graduate of Princeton University and graduate of Harvard Law School. Lu graduated from Princeton’s Wilson School and worked on the Daily Princetonian, eventually as the school paper’s news editor. Lu went to Harvard Law from 1988 to 1991, the same years as Barack Obama, but said he did not know Obama well. Still, he knew the reputation of the person who was to become the first black president of the Harvard Law Review 20 years before becoming the first black president of the United States. After graduating from Harvard Law, Lu clerked for Third Circuit Judge Robert E. Cowen before taking a job in the D.C. office of Sidley Austin, the same firm where Barack and Michelle Obama met in Chicago. Lu also met his future wife at Sidley Austin, but in the D.C. office. He stayed at the firm for four years before deciding to move to Capitol Hill. In 1997, he got a job as deputy chief counsel for the Democratic staff of the House Oversight and Government Reform Committee, and he worked in that office until 2004. Then he joined Sen. John F. Kerry’s (D-Mass.) presidential campaign as a special adviser for communications. When Kerry lost, Lu went back to the Hill, this time as the legislative director for Barack Obama. When Obama’s campaign for president began to gain steam in 2006, Lu stayed in the Senate. He did some work for the campaign, serving as campaign director for Delaware during the Democratic primary and staying on as an adviser. But his main focus when Congress was in session was to make sure Obama was prepared for his work in the Senate. When Obama won the presidency, he named Lu executive director of the transition team. Shortly after the election, Obama chose Lu to serve as cabinet secretary in the White House. 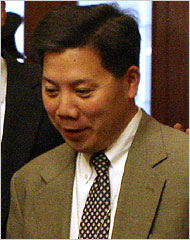