US Senator from Virginia (2013-present); former Governor of Virginia; former candidate for US VP

A Senator from Virginia; born in St. Paul, Minn., February 26, 1958; graduated University of Missouri, B.A., 1979; graduated Harvard University, J.D., 1983; lawyer; Richmond City Council 1994-1998; mayor of Richmond, Va., 1998-2001; lieutenant governor of Virginia 2002-2006; governor of Virginia 2006-2010; chairman of the Democratic National Committee 2009-2011; elected as a Democrat to the United States Senate in 2012 for the term ending January 3, 2019. Tim Kaine grew up in Kansas City working in his father's ironworking shop. He attended the University of Missouri and Harvard Law School. Kaine's public service career began when he volunteered with missionaries in Honduras. Kaine practiced law in Richmond for 17 years, representing people denied housing opportunities because of their race or disability. Kaine taught legal ethics for six years at the University of Richmond Law School. Kaine was elected to four terms on the City Council, including two terms as Richmond's mayor. Kaine was elected Virginia's Lieutenant Governor in 2001. Kaine became the 70th Governor of Virginia on January 14, 2006 - the first Virginia Governor to be inaugurated at the Colonial Capitol in Williamsburg since Thomas Jefferson. Kaine is moving the state's focus from education competence to excellence. He put into law Virginia's first requirement for classroom teachers to receive regular and meaningful teacher evaluations. He is championing efforts to expand pre-kindergarten classes, bring teacher salaries up to the national average and raise the quality of the state's career and technical programs. Kaine worked to reform the financing and accountability of Virginia's transportation infrastructure including the first major increase in investment in more than two decades, a elevation of the importance of rail and public transit solutions, and innovative strategies to combine land use and transportation planning. Kaine is focused on improving Virginians' access to the health care network. He is working with small businesses to expand their ability to purchase health insurance for their employees and is working to utilize the state's technology resources to improve the quality of health care and find cost savings for consumers. Kaine has invested about $660 million in cleaning up Virginia's rivers and the Chesapeake Bay. In honor of Virginia's 400th anniversary, he embarked on an effort to preserve 400,000 acres of open space, farms and forests by the end of the decade, through the use of creative tax incentives and collaboration with environmental groups. He issued Virginia's first comprehensive energy plan and has appointed a Climate Change Commission to advise Virginia on reduction of greenhouse gases. Kaine has worked to eliminate the estate tax, create Virginia's first sales tax holiday, take more than 140,000 low-income Virginians off the tax rolls, and give citizens more information to participate in local decisions about property tax rates. Virginia's unemployment rate is one of the lowest in the nation. 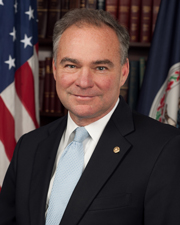