President and CEO of Seattle Foundation

Tony Mestres is President & CEO of Seattle Foundation, one of the largest community foundations in the country and one of the largest grantmakers in the Pacific Northwest. Founded in 1946, Seattle Foundation’s mission is to ignite powerful, rewarding philanthropy to make Greater Seattle a stronger, more vibrant community for all. Tony has redefined Seattle Foundation’s role as a civic leader, utilizing the foundation’s voice to uplift community needs and develop impact strategies to drive greater equity and opportunity across the region. Tony directs the strategic counsel and support provided to Seattle Foundation’s 1,200 individual, family, and corporate philanthropists and oversees the investment of more than $120 million in charitable grants annually. Since joining the Foundation in 2014, Tony has centered the organization on advancing racial equity and economic inclusion through policy change at the local and state levels. Prior to joining Seattle Foundation, Tony had a 22-year career in high technology. As a vice president at Microsoft, he was the business group leader responsible for worldwide sales and marketing of Microsoft’s Windows product line. Tony also managed strategic partnerships and execution of Microsoft’s PC, Mobile and TV Entertainment strategy. Tony’s philanthropic leadership includes more than 16 years as a partner, and later as a Board member (2013–2019), of Social Venture Partners, a 600-member organization that cultivates effective philanthropists both locally and globally. In addition, Tony was Board President (and later was named director emeritus) of the Kindering Center, a nonprofit that serves and supports children with special needs and their families. Tony currently serves on the boards of the Seattle Metropolitan Chamber of Commerce, Seattle International Foundation, Washington Roundtable, the Council on Foundations, and Hispanics in Philanthropy. A graduate of Phillips Academy Andover, Tony received his B.A. in History from Dickinson College. 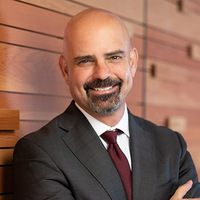