US Representative from Illinois

Congresswoman Debbie Halvorson was elected in November 2008, and is now serving her first term in the House of Representatives on behalf of the 11th Congressional District of Illinois. She is an experienced legislator who, before her election to Congress, served as the first female State Senate Majority Leader in Illinois' history. As Congresswoman Debbie Halvorson now begins her service to the people of the 11th District, she is committed to providing first-rate constituent services throughout the District. She plans to provide bi-partisan leadership to advance the many important interests of her diverse district, which is home to suburban communities south of Chicago and rural towns in Central Illinois. Debbie Halvorson is married to Jim Bush and together they have four children and four grandchildren. She is a lifelong resident of the 11th District, and she and her husband reside in Crete, Illinois. The 11th District stretches from the Indiana border to nearly Iowa, and south to central Illinois, covering much of Will, Kankakee, Grundy, LaSalle and Bureau Counties, and parts of Livingston, Woodford and McLean Counties. 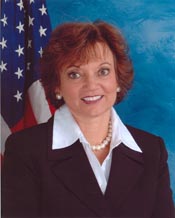