Stewart J. Greenleaf, senior counsel, has represented the 12th Senatorial District in the Pennsylvania Senate since 1978. He was a member of the House of Representatives from 1977 to 1978, serving on the House Labor Relations and Judiciary Committees as well as the Subcommittee on Crime and Corrections. He also served as an Upper Moreland Township Commissioner, as an Assistant District Attorney and Chief of the Appeals Division for the Montgomery County District Attorney’s Office and as an Assistant Public Defender in Bucks County . He is a member of the Bar Associations of Pennsylvania and Montgomery County. Mr. Greenleaf graduated from the University of Pennsylvania in 1961 and the University of Toledo Law School in 1966. He also served as a Law Clerk to Judge Frederick Groshens, President Judge of the Pennsylvania Court of Common Pleas of Montgomery County. Go here for bills sponsored by Greenleaf: https://ballotpedia.org/Stewart_Greenleaf 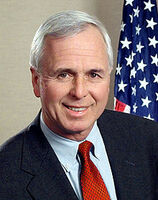