US Representative from Michigan (2019-present)

US Representative for Michigan's 8th district, elected in Nov 2018. Slotkin is a former former intelligence analyst and senior DoD official After college at Cornell University and a few years working for non-profit organizations, and graduate school at Columbia University, Elissa was recruited to join the Central Intelligence Agency as a Middle East analyst. Elissa served a total of three tours in Iraq over a span of five years. Elissa has held a variety of defense intelligence roles – under both President Bush and President Obama – at the White House, the Office of the Director of National Intelligence, the State Department, and the Pentagon. In her final role in government, Elissa served as the acting assistant secretary of defense for international security affairs, where she managed a 700-person organization with a $140 million budget, and was the principal advisor to the secretary of defense on security strategy and policy issues related to NATO, Russia, the Middle East, Africa, and the Western Hemisphere. In Baghdad, she met her husband Dave, a now-retired colonel who served in the U.S. Army for 30 years. She currently lives on her family farm in Holly, Michigan. Elissa, a third-generation Michigander, grew up in a meat-packing family who founded the family meat business, Hygrade Foods in 1949 - the makers of Ballpark Franks. Elissa spent her early life on a farm. 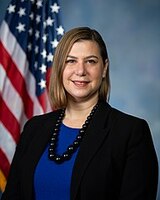