US Representative from Louisiana (2017-present)

US Representative for Lousiana's 3rd district, Clay Higgins was elected on December 10 2018 and is serving his first term in Congress. Higgins' debuts in national politics follow a dual career in law enforcement and car dealership management, with a twist of showmanship. Indeed his success in the runoff election against a fellow Republican who outspent him 5 to 1, can be traced to his YouTube fame. Career summary: At age 18, he enlisted and served 6 years in the Military Police Corps of the Lousiana National Guard, reaching the rank of staff sergeant. He then had a lucrative career as a manager of car dealerships but in 2004 returned to law enforcement, joining the Opelousa City Police Dpt and later other PDs and Sheriff's offices. During that period, as part of his assignments as the Public Information Officer, he created videos for the Crime Stoppers program, and soon overlaid his own style atop standard scripts, appealing to suspects to surrender and threatening them by name. While his superiors urged restraint and encouraged Higgins to keep a professional tone in the videos but these went viral and raised Higgins notoriety and afforded him various employment opportunities in different police departments and law enforcement organizations. 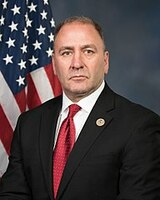