A businessman, diplomat & career US Naval Officer | 77th US Secretary of the Navy | 31st US Ambassador, Kingdom of Norway 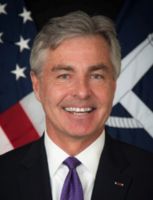