William Kistler Coors was born in Colorado on August 11, 1916. He earned a Bachelors Degree, from Princeton University in 1938 and received his Masters Degree in chemical engineering in 1939. The grandson of Adolph Coors Company founder Adolph Coors, he started his career at the company in 1939. William Coors entered the family business as a chemical engineer for Coors Brewing Company. Coors was respected in the industry for his ability in packaging, bottling, and engineering. He is credited with pioneering the recyclable two-piece aluminum can, which is now standard throughout the industry. In the 1950's, Coors requested $250,000 from his father, CEO Adolph Coors, Jr., to build an experimental line of aluminum cans. By the early 1960's, can recycling was viable, and the company offered customers a one-cent deposit on returned cans. Coors was elected to the board of directors in 1973. When the non-brewing assets (e.g., Coors Ceramics Co.) of Adolph Coors Co. were spun off in 1992 as ACX Technologies Inc., Bill Coors served as chairman of both companies. In 2003, at the age of 87, Coors retired from the boards of the Adolph Coors Company and the Coors Brewing Company, although he remained with the company as chief technical adviser. Coors is survived by three children, seven grandchildren and four great-grandchildren. Bill is survived by his children Margaret Coors Beresford and her husband Michael, May Louise Coors and her husband Sharad Atre and Williams Scott Coors and his partner David Hurt, 7 grandchildren and 4 great-grandchildren, and a great number of nieces, nephews, great-nieces and great-nephews. He is pre-deceased by his parents Adolph and May Coors Jr., his brothers Adolph Coors III, Joseph Coors, Sr., and his sister May Louise Tooker. 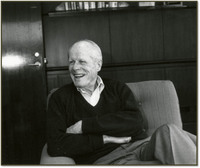