Mitchell is a former Democrat who served eight years in the Oklahoma House of Representatives from 1974 to 1984. She represented the influential National Rifle Association and American Legislative Exchange Council, which drafts conservativemodellegislation for lawmakers across the country. The New Yorker explored Mitchell's involvement with the Lynde and Harry Bradley Foundation, which has provided funding to a network of nonprofit giants advocating for stricter voting laws — groups that for years have been stoking fears of election fraud. Cleta Mitchell was a partner in Foley's Washington, D.C. office and a member of the firm's Public Affairs Practice. Ms. Mitchell has more than 30 years of experience in law, politics and public policy. Ms. Mitchell practiced before the Federal Election Commission and similar federal and state enforcement agencies. Ms. Mitchell was a member of the Oklahoma House of Representatives from 1976-1984 where she chaired the House Appropriations and Budget Committee. She served on the executive committee of the National Conference of State Legislatures. Ms. Mitchell was in private law practice in Oklahoma City in litigation and administrative law until 1991 when she became director and general counsel of the Term Limits Legal Institute in Washington, D.C. She litigated cases in state and federal courts nationwide on congressional term limits and served as co-counsel with former U.S. Attorney General Griffin Bell in the U.S. Supreme Court case on term limits for members of Congress. Ms. Mitchell represents numerous Republican candidates, campaigns and members of Congress, including Senator Elizabeth Dole (R-NC), Sen. Jim Inhofe (R-OK) Sen. David Vitter (R-LA), Sen. Gordon Smith (R-OR), Sen. Jim DeMint (R-SC) and Rep. Tom Cole (R-OK), among others. She has served as legal counsel to the National Republican Senatorial Committee. Ms. Mitchell served as co-counsel for the National Rifle Association in the Supreme Court case involving the 2002 federal campaign finance law. Ms. Mitchell has testified before Congress several times and is a frequent speaker and guest commentator on election law and politics. In 1999, she authored The Rise of America's Two National Pastimes: Baseball and the Law, published by the University of Michigan Law Review. Ms. Mitchell received her B.A. (high honors, 1973) and J.D. (1975) from the University of Oklahoma. She is admitted to practice in the District of Columbia, the State of Oklahoma, the Supreme Court of the United States and federal district and appellate courts. 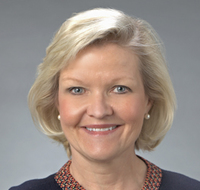