Steve Ricchetti, 63, is part of Biden’s inner circle, one of the few aides who has Oval Office walk-in privileges. He is close enough to the family that he golfed with the president and his grandson last weekend in Wilmington. Despite senior roles in each of the past three Democratic administrations, Ricchetti has operated largely out of the limelight. After graduating from law school, Ricchetti worked as a lobbyist for Allied Corp., an international health and technology company, and then ran the political department of Blue Cross Blue Shield Association. He spearheaded the Democratic Senatorial Campaign Committee before rising to a senior White House legislative affairs role under Clinton, working on campaign finance reform, health-care programs and Middle East peace talks, among other issues. He went on to start a lobbying firm with his brother Jeff between moving in and out of Democratic administrations. After leaving the Clinton White House, he returned in 1999 — walking away from a $1.1 million payday — and helped convene emergency planning meetings related to the fallout from the president’s sexual relationship with an intern. Ricchetti stopped working as a registered lobbyist in 2009, although he ran the company he founded with his brother until he was hired by Biden in 2012. Ricchetti is deeply involved in some of the president’s most intimate affairs, managing Biden’s schedule through the death of his son Beau Biden and controversies related to Hunter Biden. He serves as a key conduit for Biden’s most important donors. Ricchetti is among those tasked with running point on important personnel choices, including the administration’s ambassadorships. Ricchetti reflects Biden’s freewheeling extroversion — a gregarious, jovial schmoozer. Ricchetti is constantly on the phone. Even skeptics describe him as disarmingly self-effacing and solicitous. Criticism has mounted over the hiring of three of Ricchetti’s children, including a 2020 college graduate, to positions in the administration. Ricchetti’s son J.J. Ricchetti landed a junior-level post as special assistant in the Treasury Department. His daughter, Shannon Ricchetti, is a deputy associate director for the office of the White House social secretary, while another son, Daniel Ricchetti, is a senior adviser in the office of the undersecretary of state for arms control and international security. A fourth Ricchetti child, Tyler Ricchetti, is listed as working for Rep. Debbie Dingell (D-Mich. 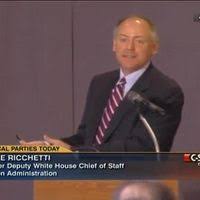