Karl Racine is a former college athlete, he has an imposing build—his shoulders and biceps fill out his pinstripe suit jackets—without being threatening. Racine emigrated from Haiti at age 3, grew up in Northwest D.C., and attended St. Johns College High, then an all-male military prep school. After graduating, he went to the University of Pennsylvania, where he captained the basketball team, led it to a pair of Ivy League championships and made the second team all-Ivy squad twice. Racine earned his law degree at the University of Virginia and returned to the District to work for a short time as a public defender before turning to private practice. He eventually landed at Venable, one of D.C.’s top white-shoe firms. There, in 2006, his colleagues elected him managing partner—which made him the first African-American at any top 100 American law firm to hold the title of managing partner. Racine did a stint in the White House counsel’s office during the Clinton impeachment hearings. It was from that perch that he first ran for D.C. attorney general in 2014. The rookie became DAGA co-chair with Oregon Attorney General Ellen Rosenblum. The first order of business was hiring the group’s first full-time executive director, Sean Rankin, who had been Racine’s political consultant in 2014. Under Racine, DAGA has become a nimble and well-funded political strike force in Washington—one that in 2018, raised and spent record-breaking sums of money, embarked on a “digital doorknock” outreach campaign that contacted 12 million voters in more than a dozen targeted states via peer-to-peer text messages and played a major role in flipping AG seats in Nevada, Michigan, Wisconsin and Colorado. 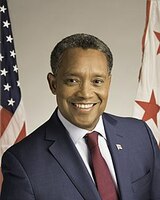