Tom Caramanico: has been the president of McCormick Taylor, Inc., an engineering company, since 1988. He previously owned the company, having sold it to an internal group in 2011, and continues to serve as president. With 480 employees in 19 offices located in nine states, the firm specializes in transportation planning, environmental studies, traffic studies and highway and bridge design. Caramanico joined the firm in 1972 as a structural engineer and became president and CEO in 1988. A vocal advocate for adequate infrastructure spending, Caramanico served on Governor Corbett’s Transportation Funding Advisory Commission. He also co-chairs the Infrastructure Working Group of the Greater Philadelphia Regional CEO Council for Growth. He is active in the community as he serves on six other non-profit boards. These include The National Liberty Museum and Friends School Haverford — both of which he chairs. He is also active on the Boards of the Friends of Independence National Historical Park, Independence Visitor Center and the Greater Philadelphia Chamber of Commerce. Caramanico and his family established the Caramanico Foundation to aid the development of quality education and teaching in Ratanakiri Province of Cambodia with targeted attention to three Caramanico Schools. The Foundation partners with William Penn Charter School, Villanova University School of Engineering, Christ Church Day School in New York and UN Women in Cambodia. Caramanico earned both his bachelor’s and master’s degrees from Villanova University in civil engineering. Caramanico was appointed to Drexel’s Board as a Commonwealth trustee by Representative Frank Dermody, minority leader of the Pennsylvania House of Representatives. 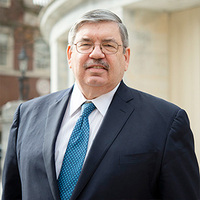