Michael G. Fitzpatrick, 56, a longtime Republican politician who rose from Bucks County commissioner to congressman, and whose nonconsecutive terms reflected two of the biggest electoral waves of the last quarter-century, died Monday, Jan. 6, after a battle with cancer. His death was confirmed by the office of his brother, U.S. Rep. Brian Fitzpatrick. Rep. Fitzpatrick had been diagnosed with colon cancer in 2008. He was in remission in 2010 when he ran for Congress again. After graduating from Bishop Egan High School as an Eagle Scout. He attended St. Thomas University in Miami, and received a law degree from Dickinson School of Law. He ran for the state House from Bucks County in 1990 and 1994, losing both times, and then became a county commissioner in 1995. He served for almost a decade before running for Congress. Rep. Fitzpatrick also practiced law with various firms in Bucks County. In addition to his brother, Rep. Fitzpatrick is survived by his wife, Kathleen, and their six children. A Representative from Pennsylvania; born in Philadelphia, Philadelphia County, Pa., June 28, 1963; B.A., St. Thomas University, Florida, 1985; J.D., Dickinson School of Law, Pa., 1988; lawyer, private practice; commissioner, Bucks County, Pa., 1995-2004; elected as a Republican to the One Hundred Ninth Congress (January 3, 2005-January 3, 2007); unsuccessful candidate for re-election to the One Hundred Tenth Congress in 2006; elected as a Republican to the One Hundred Twelfth and to the succeeding Congress (January 3, 2011-present). 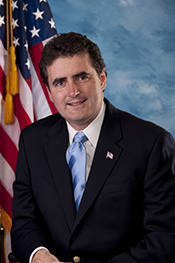