Amos Hochstein brings international political and government relations expertise to Cassidy & Associates. He is known for successfully representing foreign and domestic clients on a wide variety of issues ranging from technology and telecommunications to defense and aerospace. Mr. Hochstein uses his international experience and knowledge of federal government operations to build coalitions within Congress to ensure passage or defeat of legislation that affects clients. He also represents foreign governments on bilateral relations with the U.S. in general and during their trade negotiations in particular. Mr. Hochstein has experience with advising U.S. and foreign companies through the Mergers & Acquisitions regulatory process. He has also worked to obtain World Bank approval for major infrastructure projects on behalf of stakeholder companies and governments. Mr. Hochstein focuses primarily on the Middle East, Asia, Africa, Russia, CIS, and EU institutions. His expertise stems from years spent working on international policy issues on Capitol Hill. Immediately prior to coming on at Cassidy & Associates, Mr. Hochstein served as the Senior Policy Advisor to the U.S. House of Representatives Committee on International Relations, where he directed the overall Democratic foreign policy agenda and served as an advisor to all 23 Democratic Members of the Committee. He had specific responsibility over international economic policy, export controls on high technology, and Middle East policy. Prior to his work on the Committee, Mr. Hochstein was a member of the professional staff for the House Subcommittee on International Economic Policy and Trade where he worked on international trade agreements, privacy issues, and trade and export promotion. Between his time spent working for the Committee and his tenure on the Subcommittee, Mr. Hochstein represented the United States Congress to multi-lateral organizations and foreign governments in over 50 countries. Earlier in his career, he served as a Legislative Assistant to Representative Sam Gejdenson (D-CT), worked at Bankers Trust, Inc. (now part of Deutsche Bank), and was a consultant at Lapidot PR. 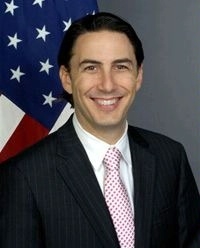