Reed Hastings founded Netflix, Inc. in 1997 and has served as Chairman of the Board from its inception. Mr. Hastings became Chief Executive Officer in September 1998. Prior to joining Netflix, Mr. Hastings served as Chief Executive Officer of Pure Atria Software, a maker of software development tools, from October 1991, until it was acquired by Rational Software Corporation in August 1997. He holds several patents in the areas of data processing and software development. Mr. Hastings joined the Microsoft Board on March 26, 2007. He is an active educational philanthropist and board member of many charitable organizations. Mr. Hastings received a BA from Bowdoin College in 1983 and an MSCS degree from Stanford University in 1988. Between Bowdoin and Stanford, Mr. Hastings served in the U.S. Peace Corps as a high school math teacher in Swaziland. 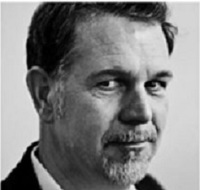