Trump Secretary of the Interior

Mr. Bernhardt is a native of Rifle, Colorado. He is an avid hunter and fisherman. He recently served on the Board of Game and Inland Fisheries for the Commonwealth of Virginia. He has previously served as the United States Commissioner to the International Boundary Commission, U.S. and Canada. From 2001 and 2009, he held several positions within the Department of the Interior, including, after unanimous confirmation, serving as Solicitor, which is the Interior’s third ranking official and chief legal officer. Currently, Mr. Bernhardt chairs the natural resource law practice at Brownstein, Hyatt Farber and Schreck, LLP. Mr. Bernhardt earned a B.A. from the University of Northern Colorado. He graduated with honors from the George Washington University National Law Center and is admitted to various state and federal court bars. He is married to Gena Bernhardt. They have two children, and reside in Arlington, Virginia. 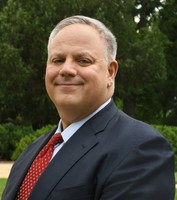