John A. Thain is Chairman and Chief Executive Officer. Prior to joining CIT, from December 2007 to January 1, 2009, Mr. Thain was Chairman and Chief Executive Officer of Merrill Lynch & Co., Inc, one of the world’s leading wealth management, capital markets and advisory companies. From June 2006 to December 2007, Mr. Thain served as Chief Executive Officer and a director of NYSE Euronext, Inc. following the NYSE Group and Euronext N.V. merger. Mr. Thain joined the New York Stock Exchange in January 2004, serving as Chief Executive Officer and a director. Before joining the NYSE, Mr. Thain was the president and chief operating officer of The Goldman Sachs Group Inc. He had been president and co-chief operating officer from May 1999 through June 2003. From 1994 to 1999, Mr. Thain served as chief financial officer and head of operations, technology and finance. From 1995 to 1997, he was also co-chief executive officer for European operations. Mr. Thain is a member of the MIT Corporation Board, the Dean’s Advisory Council of MIT/Sloan School of Management and the U.S. National Advisory Board of INSEAD. He serves on the Board of Managers of the New York Botanical Garden, is a member of the Board of Directors of the French-American Foundation, and is a trustee of New York-Presbyterian Hospital and a General Trustee of Howard University. Mr. Thain received an MBA from Harvard University in 1979 and a BS degree from Massachusetts Institute of Technology in 1977. 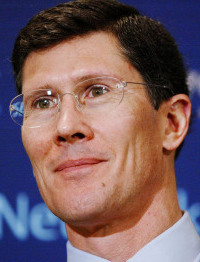