T. Boone Pickens Jr., the swashbuckling Texas oil-and-gas entrepreneur whose storied life cast him in the disparate roles of corporate raider, defender of shareholder rights, unlikely environmentalist, no-holds-barred polemicist for political conservatism, and controversial philanthropist, died on Wednesday September 11 2019 at his home in Dallas. He was 91. Assaulting America's televisions with "Pickens Plan." Became a billionaire betting big on black gold; now promoting U.S. energy independence with a mixture of wind, nuclear and drilling proposals, plus incentives for natural-gas-powered heavy-duty vehicles. Leasing land to build wind farms. Wildcatter studied geology at Oklahoma State; graduated 1951. Worked for Phillips Petroleum for 3 years; became bored, quit. Started Mesa Petroleum 1956 with $2,500. Discovered oil, gas and debt. Sold to Richard Rainwater; shook oil industry with attempted takeovers of Phillips, Gulf, Unocal. Today runs energy fund BP Capital; owns vast water rights in Texas Panhandle. Republican gave $2 million to the Swift Boat Veterans for Truth 2004; now pushing energy agenda on both McCain and Obama. Has donated over $500 million to charity in past 3 years, including $165 million to alma mater's athletic program. T. Boone Pickens, founder and chairman, BP Capital Management, is principally responsible for the formulation of the energy futures investment strategy of the BP Capital Commodity Fund and the BP Capital Equity Fund. With more than $4 billion under management, BP Capital manages one of the nation’s most successful energy-oriented investment funds. Pickens frequently utilizes his wealth of experience in the oil and gas industry in the evaluation of potential equity investments and energy sector themes. He has not been shy in predicting oil and gas prices and — more often than not — has been uncanny accurate. Pickens is also aggressively pursuing a wide range of other business interests, from water marketing and ranch development initiatives to Clean Energy, a company he founded and is the largest shareholder. Through Mesa Water, Pickens is the largest private holder of permitted groundwater rights in the United States. Clean Energy is advancing the use of natural gas as a cleaner-burning and more cost-effective transportation fuel alternative to gasoline and diesel. Boone grew up in Holdenville, a small eastern Oklahoma town. His father was in the oil business, and his mother ran the Office of Price Administration during World War II, rationing gasoline and other goods for four counties. Boone attributes much of his success to his mother and father. Boone graduated as a geologist from Oklahoma State University in 1951 and started work with Phillips Petroleum Co. in Bartlesville, Oklahoma. After three and a half years, he struck out on his own as an independent geologist. Pickens was founder of Mesa Petroleum in its various forms beginning in 1956. Mr. Pickens’ career at Mesa spanned four decades. Under his leadership, Mesa grew to become one of the largest and most well known independent exploration and production companies in the United States; Mesa produced more than 3 trillion cubic feet of gas and 150 million barrels of oil from 1964 to 1996. From its inception, Mesa was at the forefront of change and innovation. Mesa's fitness program is a good example. Boone has long understood the benefits of physical fitness. Mesa's fitness program has become a model for corporate America, and Mesa was the first company to be accredited by the Institute for Aerobics Research. Throughout his professional life, Pickens has been a generous philanthropist, giving away almost one half of a billion dollars. In 2006, he contributed $175 million to a wide range of causes and the formation of the T. Boone Pickens Foundation. He has appeared multiple times on The Chronicle of Philanthropy’s list of top U.S. philanthropists. The T. Boone Pickens Foundation is improving lives through grants supporting educational programs, medical research, athletics and corporate wellness, at-risk youth, the entrepreneurial process, and conservation and wildlife initiatives. The Horatio Alger Association of Distinguished Americans Inc. selected Pickens as a recipient of the 2006 Horatio Alger Award, which epitomizes those who overcome adversity and humble beginnings to achieve success. It is but one of many honors awarded Pickens for his achievements, including Trader Monthly’s 2006 Trader of the Year award, the Texas Business Hall of Fame, and the Oklahoma Hall of Fame. A major Republican donor, Mr. Pickens supported Swift Boat Veterans for Truth, which leveled false allegations against John Kerry during the 2004 presidential campaign. Along the way, he had five wives, became a major philanthropist and saw the football stadium at Oklahoma State University, his alma mater, named for him after a donation of hundreds of millions of dollars to the school. Mr. Pickens’s five marriages — to Lynn O’Brien, Beatrice Carr Stuart, Madeleine Paulson, Nelda Cain and Toni Chapman Brinker — ended in divorce. He is survived by four children from his first marriage, Deborah Pickens Stovall, Pam Pickens Grace and Michael and Tom Pickens; a daughter of his second wife’s, Liz Pickens Cordia, whom he adopted; 11 grandchildren, and a number of great-grandchildren. 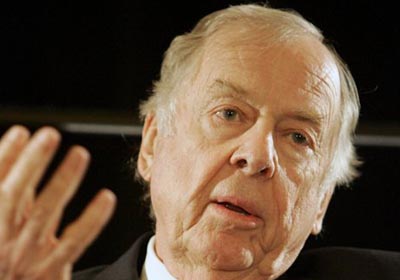