Shortly after serving as law clerk to Judge Paul Roney of the Fifth (now Eleventh) Circuit Court of Appeals, and to Justice William H. Rehnquist, Mr. Cooper joined the Civil Rights Division of the U.S. Department of Justice in 1981. In 1985 President Reagan appointed Mr. Cooper to the position of assistant attorney general for the Office of Legal Counsel. Mr. Cooper reentered private practice in 1988, and in October 1996 he became a founding partner of Cooper & Kirk. In 1998 Mr. Cooper was appointed by Chief Justice William H. Rehnquist to serve as a member of the Standing Committee on Rules of Practice and Procedure of the Judicial Conference of the United States. Mr. Cooper is a member of the American Law Institute and the American Academy of Appellate Lawyers. J.D., University of Alabama School of Law in 1977 B.S., University of Alabama School of Business Administration in 1974 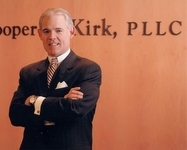