US Representative and Senator from Virginia

A Representative and a Senator from Virginia; born in Whittier, Los Angeles County, Calif., March 8, 1952; B.A., J.D., University of Virginia; elected as a Republican to the One Hundred Second Congress by special election November 5, 1991, to fill the vacancy caused by the resignation of D. French Slaughter Jr., and served from November 5, 1991, to January 3, 1993; was not a candidate for reelection to the One Hundred and Third Congress, but was a successful candidate for Governor of Virginia for the term beginning January 15, 1994, and served until January 17, 1998; elected to the United States Senate in 2000 for the term ending January 3, 2007; chair, National Republican Senatorial Committee (2003-2005); unsuccessful candidate for reelection in 2006. 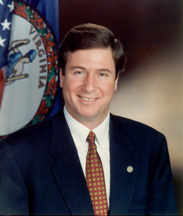