US Representative from New York

A Representative from New York; born in Newburgh, Orange County, N.Y., August 26, 1935; graduated from Marymount School, Tarrytown, N.Y., 1952; B.A., Marymount College, New York, N.Y., 1956; J.D., Fordham University School of Law, New York, N.Y., 1960; lawyer, private practice; assistant district attorney, Queens County, N.Y., 1974-1978; elected as a Democrat to the Ninety-sixth and to the two succeeding Congresses (January 3, 1979-January 3, 1985); was not a candidate for reelection to the Ninety-ninth Congress in 1984, but was the unsuccessful Democratic candidate for Vice President of the United States; fellow of the Institute of Politics, John F. Kennedy School of Government, Harvard University, Cambridge, Mass., 1988-1992; president, International Institute for Womens Political Leadership; unsuccessful candidate for nomination to the United States Senate in 1992 and 1998; permanent member, United Nations Commission on Human Rights, 1993-1996; is a resident of Forest Hills, N.Y. Geraldine A. Ferraro is counsel with Blank Rome LLP. Prior to joining Blank Rome, Ms. Ferraro chaired the Public Affairs practice of the Global Consulting Group (GCG), a leading international communications firm. Ms. Ferraro has counseled clients on a wide range of public policy issues not only giving strategic advice but also providing lobbying support when needed. She has handled matters before agencies of the United Nations, the U.S. Government, the Congress, and the Conference of Mayors as well as certain state and local entities. Her extensive work with the NGO community over her years in public service allows her the access necessary to build strategic alliances on behalf of her clients. Ms. Ferraro earned a place in history as the first woman vice-presidential candidate on a national party ticket. She was first elected to Congress from New York’s Ninth Congressional District in Queens in 1978 and served three terms in the House of Representatives. Her committee assignments in Congress included the Public Works Committee, Post Office and Civil Service Committee, and Budget Committee. Ms. Ferraro also served on the Select Committee on Aging. An active participant in the nation’s foreign policy debate, Ms. Ferraro serves as a Board member of the National Democratic Institute of International Affairs and is a member of the Council on Foreign Relations. Ms. Ferraro is currently a political analyst for FOX News and a columnist for the New York Times Syndicate. Ms. Ferraro received her J.D. degree from Fordham University School of Law. She has honorary degrees from a number of colleges and universities nationwide and serves on several not-for-profit boards as well as on the board of Goodrich Petroleum Inc. Geraldine Anne Ferraro was born on Aug. 26, 1935, in the Hudson River city of Newburgh, N.Y., where she was the fourth child and only daughter of Dominick Ferraro, an Italian immigrant who owned a restaurant and a five-and-dime store, and the former Antonetta L. Corrieri. She is survived by husband, Mr. Zaccaro; her three children, Donna Zaccaro Ullman, John Zaccaro, and Laura Zaccaro Lee; and eight grandchildren, Matthew and Natalie Ullman; Elizabeth, Samantha and John Zaccaro; and Daisy, Alexander and Jane Lee. 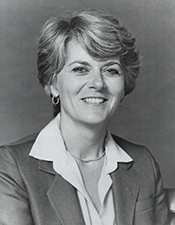