Lobbyist and Former US Representative from New Hampshire

Bill Zeliff passed away peacefully on October 18th 2021 surrounded by family. Bill leaves behind a loving family including his wife Sydna; son Jim and his wife Tammy; son Michael and his wife Barbra; son Will; grandchildren Dustin, Ali, Haley, Zach, Tim, Caitlin, and Will; and sister Jennifer and her husband Tim. Bill grew up in Woodmont Connecticut and graduated from the University of Connecticut. He went on to attend Army Boot Camp and served in the Delaware National Guard. He followed this service by working for the DuPont Company for 15 years in Sales and Marketing. In 1976 inspiration struck Bill in the form of a Wall Street Journal ad for a county inn in New Hampshire. Bill and Sydna bought the Christmas Farm Inn and created many meaningful memories until the inn was sold in 2000. Bill got the political bug by supporting Gov. John Sununu SR’s first run for Governor. From there, he ran for US House of Representatives in 1990 and won. He served as a New Hampshire Congressman for six years where he worked tirelessly and made lifelong friends. After serving for three terms, he stayed in DC as a consultant working with General Mills, Boys Town and Sig Sauer. Bill retired to Venice Florida with his wife Sydna in 2017. Representative from New Hampshire; born in East Orange, Essex County, N.J., June 12, 1936; graduated from Milford High School, Millford, Conn. 1954; B.S., University of Connecticut, Storrs, Conn., 1959; Connecticut National Guard,1958-1964; United States Army Reserve; sales and marketing manager; consumer products division, E.I. DuPont de Nemours and Co., 1959-1976; innkeeper and small business owner; unsuccessful candidate for the New Hampshire state senate in 1984; delegate, Republican National Convention, 1988; elected as a Republican to the One Hundred Second and to the two succeeding Congresses (January 3, 1991-January 3, 1997); was not a candidate for reelection to the United States House of Representatives in 1996, but was an unsuccessful candidate for gubernatorial nomination in New Hampshire; private advocate. From LIvingston Group Corporate Overview: Honorable William H. Zeliff, Jr. (Senior Counselor) Mr. Zeliff was elected to the U.S. House of Representatives in 1990 from the first district of New Hampshire and chose to retire in 1997. He has earned the reputation among Members of Congress of a problem solver and a consensus builder. As Deputy Whip, Mr. Zeliff helped create and implement the House agenda. His service as Chairman of the Subcommittee on National Security, International Affairs and Criminal Justice of the House Government Reform Committee was instrumental in moving the drug issue to center stage during the 1996 presidential election. He was a senior member of the House Transportation Committee and served with distinction on the Surface Transportation, Water Resources and Aviation Subcommittees. He authored the "A to Z Budget Cutting Tool" used by Members of Congress to encourage fiscal responsibility. Mr. Zeliff successfully rebuilt and operated three small businesses, winning the New Hampshire Restaurant and Lodging Association's prestigious Innkeeper of the Year award in 1988. Over the last ten years, Mr. Zeliff has been actively engaged as a private advocate for Zeliff Enterprises and The Livingston Group. He takes special interest in matters related to firearms, charitable, and international issues. Mr. Zeliff, a native of East Orange, NJ, received his bachelor’s degree from the University of Connecticut in 1959. He served honorably in the Connecticut Army National Guard from 1958 to 1964 and afterwards served in the U.S. Army Reserves. He and his wife, Sydna, split their time between homes in Washington, D.C. and Nokomis, FL. They have three children. 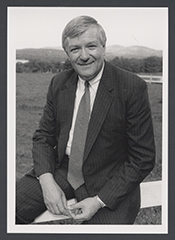