US Representative from Indiana

A Representative from Indiana; born in Oakland, Calif., June 8, 1958; B.A., Yale University, 1980; J.D., University of Chicago, 1983; admitted to the Indiana bar; special assistant to President Reagan for domestic affairs; special assistant to Attorney General Meese in the Reagan Administration; liaison to the Presidents Commission on Privatization and specialized in constitutional legal policy at the Justice Department; special assistant and deputy counsel to Vice President Quayle; executive director of the Presidents Council on Competitiveness; fellow, Hudson Institute Competitiveness Center; senior fellow, Citizens For A Sound Economy; elected as a Republican to the One Hundred Fourth and two succeeding Congresses (January 3, 1995-January 3, 2001); was not a candidate for reelection to the United States House of Representatives, but was an unsuccessful candidate for Governor in 2000. Mr. McIntosh was a member of the U.S Congress representing Indiana's 2nd District from 1995-2001. He served on the Republican House Leadership Committee working extensively on budget and tax matters. Mr. McIntosh was chairman of the Subcommittee on Regulatory Relief, which led house oversight of environmental, health and safety regulations, federal drug approval process, and government information and technology policy. Previously, he was the Director of the Competitiveness Center at the Hudson Institute. Mr. McIntosh served as Executive Director of the Competitiveness Council and Assistant to Vice President Dan Quayle, where he coordinated White House review of all government regulations for the first Bush Administration. During the Reagan Administration, Mr. McIntosh was a special assistant to President Reagan coordinating the President's Commission on Privatization. He also served as a special assistant to Attorney General Edwin Meese. Mr. McIntosh is also a founder and National Co-chairman of the Federalist Society for Law & Public Policy. Mr. McIntosh resides in Muncie, Indiana, with his wife, Ruthie, and their two children. 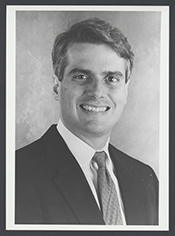