US Representative from New Jersey

A Representative from New Jersey; born in Newark, Essex County, N.J., September 19, 1929; graduated from West Orange High School, West Orange, N.J., 1947; B.A., Montclair State College, Montclair, N.J., 1951; graduate work, Montclair State College, Montclair, N.J., 1951-1953, and Rutgers University, New Brunswick, N.J., 1975; teacher; vice president, board of education, Ridgewood, N.J., 1970-1973; elected as a Republican to the Ninety-seventh and to the ten succeeding Congresses (January 3, 1981-January 3, 2003); not a candidate for reelection to the One Hundred Eighth Congress in 2002. Mrs. Roukema was born Margaret Scafati on Sept. 19, 1929, in Newark. Her father was an auto mechanic, and his parents had immigrated from Italy. She received a bachelor’s degree in history and political science from Montclair State College in 1951 and did graduate work there. She taught high school history and government in Ridgewood, N.J., and from 1970 to 1973 served on the town’s Board of Education. First elected to the House in 1980, four years after her son Todd died from leukemia at age 17. That wrenching experience, she said, motivated her to become active in politics and inspired her nearly decade-long effort to pass legislation allowing people to leave work for extended periods to care for newborn babies and deal with family medical issues without fear of losing their jobs. In the mid-1970s, she did graduate work at Rutgers before stopping to care for her son. She was able to do so in part because her husband, Richard W. Roukema, worked as a psychiatrist. The Roukemas had two other children, Greg and Meg, and several grandchildren. Dr. Roukema died in 2011. 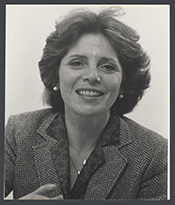