US Senator from Georgia

A Senator from Georgia; born in Young Harris, Georgia, on February 24, 1932; graduated Young Harris College 1951; served in U.S. marine corps 1953-1956; graduated University of Georgia 1957, Masters degree 1958; businessman; professor of political science and history; mayor of Young Harris 1959-1960; Georgia state senator 1961-1964; member, state Board of Pardons and Paroles 1973-1975; lieutenant governor of Georgia 1975-1991; Governor of Georgia 1991-1999; appointed on July 24, 2000, as a Democrat to the United States Senate to fill the vacancy caused by the death of Paul Coverdell; took the oath of office on July 27, 2000; elected as a Democrat to the United States Senate in a November 2000 special election for the remainder of the term ending January 3, 2005; was not a candidate for election in 2004; member, American Battle Monuments Commission, 2005-. Senator Zell Miller serves as a Senior Policy Advisor in the national Government Affairs practice of McKenna Long & Aldridge. In this role, he counsels the firm's clients on federal and state policy issues. Senator Miller was elected to the U.S. Senate in 2000. As a member of the Agriculture, Nutrition and Forestry, Banking, Housing and Urban Development and Veterans' Affairs committees, Senator Miller focused on improving agriculture policy, tax policy and national security. He co-authored bills establishing the Department of Homeland Security and authorizing President Bush's first two rounds of tax cuts. Only the third Georgian elected both governor and senator, Senator Miller served as governor of Georgia from 1991-1999. During those years, he focused on education by creating the only voluntary pre-kindergarten program for 4-year-olds and the HOPE scholarship program, which has awarded more than $2.3 billion in scholarship funds since 1993. He also introduced new welfare reforms, promoted economic development, and helped make Georgia a leading state in job creation with new jobs having been created at an average rate of more than 2,500 a week. Senator Miller served in the Marine Corps for three years and credits the experience as one of the major influences in his life. In 1954, he married Shirley Carver, who survives him, as do two sons, Murphy and Matthew; four grandchildren; and eight great-grandchildren. 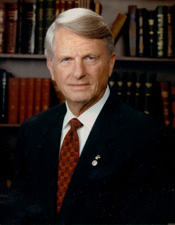