Governor of Ohio; US Representative and Senator from Ohio

A Representative and a Senator from Ohio; born in Springfield, Ohio, January 5, 1947; attended the public schools in Yellow Springs, Ohio; B.S., Miami University, Oxford, Ohio 1969; J.D., College of Law, Ohio Northern University, Ada 1972; admitted to the Ohio State bar in 1972, and commenced practice in Xenia, Ohio; assistant prosecuting attorney, Greene County, Ohio 1973-1975; prosecuting attorney, Greene County 1977-1981; elected to the Ohio Senate 1981-1982; elected as a Republican to the Ninety-eighth and to the three succeeding Congresses (January 3, 1983-January 3, 1991); one of the managers appointed by the House of Representatives in 1986 to conduct the impeachment proceedings against Judge Harry E. Claiborne; elected lieutenant governor of Ohio for the four-year term beginning January 14, 1991; elected as a Republican to the United States Senate in 1994 and reelected in 2000 for the term ending January 3, 2007; unsuccessful candidate for reelection in 2006. 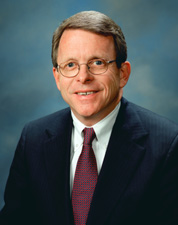