Former US Senator and Representative from Indiana; Biden Nominee to be Ambassador to the Holy See

Joseph Donnelly is a partner at Akin Gump in Washington, D.C. He served as a United States Senator from Indiana from 2013 to 2019 and was a Member of the U.S. House of Representatives from 2007 to 2013, representing Indiana’s 2nd Congressional District. He was a member of the Afghanistan Study Group and has been a professor at University of Notre Dame. Donnelly is Chairman of the Board of the Soufan Center in New York, and a Senior Advisor to multiple corporations including Inovateus Solar in South Bend, Indiana, Living Greens Farms in Faribault, Minnesota, Hawkeye 360 in Herndon, Virginia, and Champ Title in Cleveland, Ohio. He received a B.A. from University of Notre Dame, and a J.D. from Notre Dame Law School. He is the recipient of numerous honors, including the United States Navy Distinguished Service Medal and a Medal of Merit from the National Guard Association of the United States. A Senator and a Representative from Indiana; born in Queens, Queens County, N.Y., September 28, 1955; B.A., University of Notre Dame, Notre Dame, Ind., 1977; J.D., University of Notre Dame, Notre Dame, Ind., 1981; lawyer, private practice; business owner; unsuccessful candidate for the 108th Congress in 2004; elected as a Democrat to the One Hundred Tenth and to the two succeeding Congresses (January 3, 2007-January 3, 2013); was not a candidate for reelection to the House of Representatives but was elected as a Democrat to the United States Senate in 2012 for the term ending January 3, 2019. 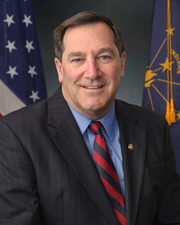