Former US Senator from New Mexico

A Senator from New Mexico; born in Albuquerque, Bernalillo County, N.Mex., May 7, 1932; graduated, University of New Mexico 1954; graduated, Denver University Law School 1958; admitted to the New Mexico bar in 1958 and commenced practice in Albuquerque; elected to Albuquerque City Commission 1966, chairman (ex-officio mayor) 1967; elected as a Republican to the United States Senate in 1972 and reelected in 1978, 1984, 1990, 1996, and again in 2002 for the term ending January 3, 2009; chair, Committee on the Budget (One Hundred Fourth through One Hundred Sixth Congresses, One Hundred Seventh Congress [January 20, 2001-June 6, 2001]), Committee on Energy and Natural Resources (One Hundred Eighth and One Hundred Ninth Congresses). He had long struggled with frontotemporal lobar degeneration, a progressive disease of the brain that causes forms of dementia. He announced in October 2007 that he would not seek a seventh term because of the disease. During his last full year in office, 2008, he often appeared visibly weakened in public appearances. When he left office in January 2009, after 36 years on Capitol Hill, Mr. Domenici had become the longest-serving senator in New Mexico history. He was succeeded by Representative Tom Udall, a Democrat and a son of Stewart Udall, a former congressman from Arizona and the interior secretary in the Kennedy and Johnson administrations. Mr. Domenici attended the University of New Mexico, where he was a star pitcher on the baseball team, and graduated with a degree in education in 1954. He spent a year teaching junior high school science and math and then attended the Denver University law school, earning his degree in 1958. He married Nancy Burk, a physical therapist, that same year. In 2013, Mr. Domenici’s upright image was tarnished when it was revealed that he had fathered a child in the 1970s with Michelle Laxalt, whose father was Senator Paul Laxalt, Republican of Nevada. Mr. Domenici was 46 and Ms. Laxalt was 24 at the time of their relationship. He and Ms. Laxalt disclosed the affair, they said, because they believed someone else was about to do so. Their son, Adam Laxalt, has been Nevada’s attorney general since 2015. Besides his son Pete Jr. and Mr. Laxalt, Mr. Domenici’s survivors include his wife and their seven other children — Lisa, Nella, Claire, David, Nanette, Paula and Helen — 15 grandchildren, two great-grandchildren and two sisters. 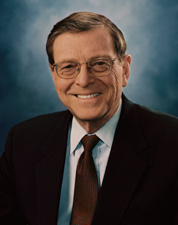