Former US Representative from Indiana

A Representative from Indiana; born in Rensselaer, Jasper County, Ind., November 26, 1958; graduated from North White High School, 1976; B.S., The Citadel, Charlestown, S.C., 1980; J.D., Valparaiso University School of Law, Valparaiso, Ind., 1984; lawyer, private practice; United States Army, 1984-1987; United States Army Reserve, 1980 to present; Indiana state deputy attorney general, 1987-1988; legal counsel for the 22nd Theater Army in Operation Desert Shield and Desert Storm; elected as a Republican to the One Hundred Third and to the eight succeeding Congresses (January 3, 1993-January 3, 2011); one of the managers appointed by the House of Representatives in 1998 to conduct the impeachment proceedings of President William Jefferson Clinton; chair, Committee on Veterans Affairs (One Hundred Ninth Congress); not a candidate for reelection to the One Hundred Twelfth Congress in 2010 Hailing from rural Indiana and growing up along the banks of the Tippecanoe River, Steve Buyer lives not far from his childhood home, with his wife, Joni. They have two children, a son, Ryan; and, their daughter Colleen; and a grandson, Kaden. Congressman Buyer is a graduate of North White High School in Monon, and a distinguished military graduate with a degree in Business Administration from The Citadel in Charleston, South Carolina. Upon graduation from Valparaiso Law School, Congressman Buyer branch transferred to the Judge Advocate General Corps and was called to active duty for a period of three years. He was commissioned as a 2nd Lieutenant in the United States Army, and served his country as a Staff Judge Advocate in the Gulf War. Congressman Buyer continues his service as a Colonel in the Army Reserves. In 1992, he defeated Congressman Jim Jontz and was elected to represent the twenty counties of Northern Indiana. In 2002, due to congressional redistricting, Congressman Buyer ran and won an election to represent Indiana’s Fourth Congressional District, encompassing all or part of 12 counties in west central Indiana. 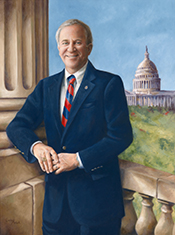