Rudy deLeon is the Senior Vice President of National Security and International Policy at American Progress in Washington, D.C. He serves on several nonprofit boards and is a part-time college instructor. deLeon is also a former senior U.S. Department of Defense official, staff director on Capitol Hill, and retired corporate executive. For five years, beginning in 2001, he served as a senior vice president for the Boeing Company deLeon’s 25-year government career concluded in 2001 after his tenure as deputy secretary of defense, where he was a member of the Deputies Committee of the National Security Council and the National Partnership Council. In earlier Pentagon assignments, deLeon served as undersecretary of defense for personnel and readiness from 1997 to 2000, and as undersecretary of the Air Force from 1994 to 1997. He was nominated for these positions by President Bill Clinton and confirmed by the U.S. Senate. From November 1985 through 1993, deLeon served on the Committee on Armed Services in the U.S. House of Representatives as a member of the professional staff and as staff director. In 1986, deLeon participated in the debate and passage of the 1986 Goldwater-Nichols Act, which made fundamental changes in military organization and operations. deLeon began his career in the federal government in 1975, holding various staff positions in the U.S. Senate and U.S. House of Representatives. He earned a bachelor’s degree from Loyola Marymount University in 1974, and in 1984 he completed the executive program in national and international security at the John F. Kennedy School of Government at Harvard University. deLeon received the Defense Civilian Distinguished Service Award in 1994, 1995, and 2001, and received the National Intelligence Distinguished Service Medal in 2001. He was recognized by the National League of POW-MIA Families in 1999 and by the National Military Families Association in 2000. 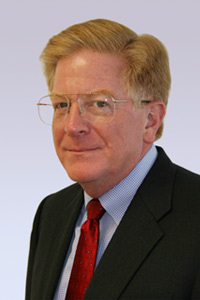