US Representative from Missouri

Former congressman Todd Akin (R-Mo.), who famously lost a 2012 Senate bid after he expressed controversial views about abortion in cases of “legitimate rape,” died late Sunday October 3 2021, the Associated Press reported, citing a statement from Akin’s son Perry. He was 74. Mr. Akin was prone to making controversial comments. He was best known for an unsuccessful run for the U.S. Senate in 2012, during which he sparked a national backlash for a statement about abortion that derailed his campaign. Mr. Akin refused to bow out of the race and eventually lost to incumbent Democrat Claire McCaskill, who went on to represent Missouri in the U.S. Senate until 2018. A Representative from Missouri; born in New York, N.Y., July 5, 1947; B.S., Worchester Polytechnic Institute, Worchester, Mass., 1971; M.Div., Covenant Seminary, St. Louis, Mo., 1984; United States Army, 1971-1980; member of the Missouri state house of representatives, 1988-2001; elected as a Republican to the One Hundred Seventh and to the five succeeding Congresses (January 3, 2001-January 3, 2013); was not a candidate for reelection to the One Hundred Thirteenth Congress in 2012, but was an unsuccessful candidate for election to the United States Senate; died on October 3, 2021, in Wildwood, Mo. He served on the board of the Mission Gate Prison Ministry and was involved with the Boy Scouts of America and the antiabortion group Missouri Right to Life. Mr. Akin had 18 grandchildren and six children and is survived by his wife, Lulli, and his mother, Nancy. 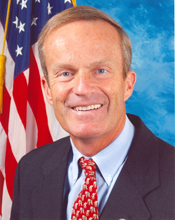