Former US Representative from Utah

LOVE, Ludmya Bourdeau (Mia), served two terms as US Representative from Utah's 4th district, from 2015 to 1019. She was the first black female Republican elected to Congress. Mia was narrowly defeated by Democrat Ben McAdams in a race described as "consequential to both parties" because she had "stood up to President Donald Trump on immigration" and "because national Democrats saw McAdams as one of their best chances to gain a foothold in red turf". Mya Love started her political career in Saratoga Springs, UT where she was a member of the city council from 2003 to 2009 and then mayor, from 2010 to 2013. Early life: Born to Haitian parents in Brooklyn, N.Y. on December 6, 1975; High School in Norwalk,CT; B.A., University of Hartford, 1997; Early career: flight attendant; call center operator; 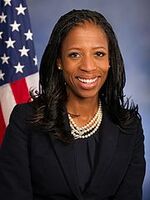