George Kollitides is Chairman and CEO of Freedom Group, Inc. (FGI), the largest firearms and ammunition manufacturer in the world, which includes such iconic brands as Remington, Bushmaster, DPMS and Marlin. Mr. Kollitides is also Chairman of Tier 1 Group, a Special Forces training business. Prior to his FGI appointment, Mr. Kollitides spent more than 21 years in leadership positions in the areas of strategy, operations and finance, including serving as Lead Director of FGI. Mr. Kollitides has been passionate about firearms throughout his life. He enjoys the outdoors and conservation and holds numerous life memberships in hunting, shooting, fishing and conservation organizations. He is a regular member of the Boone and Crockett Club, a Benefactor Member of the National Rifle Association (NRA) where he serves on the Hunting and Wildlife Conservation Committee, a Director of the New York State Rifle and Pistol Association and a Director of the Safari Club Tri-State Chapter. Mr. Kollitides previously served on the NRA Nominating Committee and as a Director of the Connecticut Chapter of Safari Club. Mr. Kollitides is the Vice Chairman of the Board for the Orthopaedic Foundation for Active Lifestyles, an organization that focuses on orthopedics and musculoskeletal diseases. For his dedication, he was honored with the Leadership Award for Philanthropy in 2010. Mr. Kollitides has a Bachelor of Arts in Economics from Lafayette College and a Master of Business Administration from Columbia Business School. 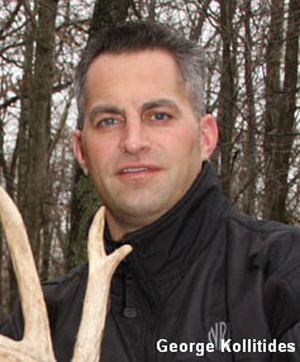