David Dechman is the chief executive officer and co-founder of Summit Rock Advisors. Summit Rock manages roughly $10 billion for 30 significant charitable foundations, college endowments, and private family clients. Prior to Summit Rock, David worked for 16 years with Goldman, Sachs & Co., most recently as Partner and co-head of Private Wealth Management for the Americas. At the time of his departure, the business managed approximately $200 billion for individual investors, earning annual revenues of roughly $1 billion. David joined Goldman Sachs in 1987 and became a partner in 1998. David is a trustee of the Museum of Modern Art in New York City, and is Chairman of its photography acquisitions committee. He also serves on the investment, audit and conservation committees at MoMA. Since 1995, David has served as a trustee of the Dana Farber Cancer Institute, a teaching hospital of Harvard Medical School, and serves on the investment committee there. He is a member of the Advisory Board of Harvard Business School (“HBS”) Initiative on Social Enterprise, and was the Chair of the Alumni Advisory Board for the HBS Social Enterprise Student Club for over ten years. From 1999 to 2003, David was a founding trustee of the Goldman Sachs Foundation. He is also a past trustee and chair of the investment committees of several significant charitable foundations. David holds an MBA from Harvard Business School and a B.S. in Chemical Engineering from Virginia Polytechnic Institute. 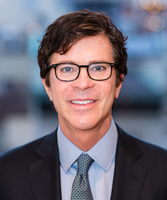