Porat joined Google as SVP and CFO in 2015 and has held the same title at Alphabet since it was created in late 2015. Previously, she spent 27 years at Morgan Stanley, most recently as EVP and CFO. She held a number of prior senior roles at the bank, including vice chairman of investment banking, and global head of the financial institutions group. She is a member of the Aspen Institute Economic Strategy Group and the Hutchins Center on Fiscal and Monetary Policy at the Brookings Institute. The Internet search giant [announced] the hiring of the 57-year-old Porat, a longtime Morgan Stanley banker who became its chief financial officer in 2010. She will become Google's highest-ranking female executive when she starts her new job on May 26, 2015 Morgan Stanley promoted Ruth Porat in 2006 to be head of the investment firm’s financial institutions group (FIG). She spent a year in London and then returned to concentrate on industrial firms. She worked with General Electric to make Genworth Financial’s 2004 stock offering the most successful IPO in two years, and advised the Mexican steel company Hylsamex as it was taken over by the Argentine firm Grupo Techint. Even outside Morgan Stanley, where she has worked for 26 years, Porat continues to build a powerful industry presence in her ongoing efforts to improve public trust in the financial system. In January at the World Economic Forum in Davos, she described stress-testing and additional transparency as necessary steps to enhancing stakeholders' faith in U.S banks - and spoke of a need for all corporate leaders to set the "tone from the top." Porat is a member of the U.S. Treasury Borrowing Advisory Committee, which assesses macroeconomic views and makes recommendations on technical issues related to debt management. She also is a trustee at her alma mater, Stanford University. Her father, Dan Porat, 93, was an electronic engineer at Stanford's SLAC National Accelerator Laboratory from 1962 to 1988. Her mother, Frieda Porat, was a psychologist and teacher who wrote books about organizational management. She died in 2012. 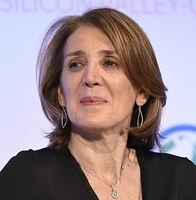