Former chairman of BP, Goldman Sachs International, and the London School of Economics

Peter Sutherland is chairman of Goldman Sachs International in London, a position he assumed in 1995, and serves as the UN Secretary General’s Special Representative for Migration & Development. Prior to joining the World Trade Organization (GATT) in 1993, he was with the firm for three years as an international advisor. Peter was chairman of BP plc from 1997 to December 2009. He is chairman of the London School of Economics. Previously, Peter was attorney general of Ireland, a commissioner of the European Communities and then chairman of Allied Irish Banks. He then went on to be the director-general of GATT. Peter earned a bachelor’s degree in Civil Law from University College Dublin. 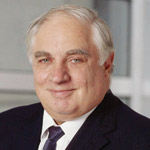